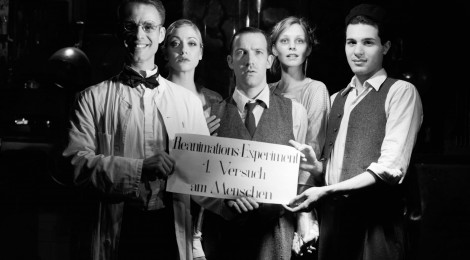 The film installation (20 min. across seven screens) will loop during the entire evening

“The Lost” has its roots in a 1933 German film production “Die Verlorenen”. All that remained of this state-censored film was storyboards, script notes and some footage from the first days of shooting. “The Lost” is an attempt to recreate and complete this forgotten time capsule. The finished piece is presented as seven loops without a conclusive edit or narrative. While the dialogue used was from the original script, some scenes had to be interpreted from storyboards and notes. Filming took place in open art spaces where the public watched the process, and often became part of the film itself. The act of remaking the film was a type of performative art used to reclaim and rewrite a lost piece of film history. The filming of “The Lost” began in 2011, when the cabaret was rebuilt at Haus der Kulturen der Welt in Berlin. The following year, filming continued in Hanover at ‘Made in Germany Zwei’, among other locations.